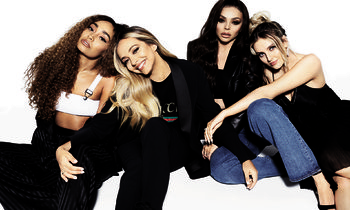 Little Mix is a British Girl Group. In 2011, they became the first group to ever win The X Factor during its eighth season.

Formed similarly to One Direction, Little Mix was comprised of four singers who originally auditioned for the show as solo artists, but were eventually put together as a group prior to the live shows. Originally known as Rhythmix, the group was forced to change their name when a charity organization of the same name threatened to sue.

They have achieved several firsts: First girl group in X Factor top 5, first group to win X Factor, first UK no 1 by any girl group since Girls Aloud (Saturdays got their first no 1 later), first X Factor winner to release an original single in summer, first UK girl group since All Saints to earn a double platinum single in Australia (and first since the Sugababes in 2005 to be in the top 3!) and first UK girl group EVER to go straight into the top 5 in the US with its debut album. They have the most VEVO-certified music videos ever for a British female artist as well as the most for any girl group, with 11 videos that have over 100 million views as of August 2017.

In 2013, they released the album Salute which followed its predecessor in being a transatlantic top tenner (it was even seen atop the US iTunes chart for a few hours, although it charted 6th — it would have been 4th if compilations were removed from the US albums chart as with the UK — and narrowly missed the top 5). This made Little Mix the first X Factor WINNER to have TWO US top 10 albums, the second act from the show after 1D, and the second UK girl group after the Spice Girls (many greats such as Bananarama, All Saints, Atomic Kitten, Sugababes, Girls Aloud and The Saturdays have only managed a top 20 album in the US at best if at all).

In 2015, after being forced to can US gigs and an entire album that they didn't think was good enough, LM came back in spectacular fashion with "Black Magic" spending 3 weeks at number 1 in the UK, and performing at the Teen Choice Awards and with Taylor Swift in spite of the shock split of Perrie with Zayn, formerly from 1D, at the same time. The girls released their most successful album yet in Get Weird, LM's most successful album in UK, Australia, and many European countries (in USA, it was narrowly denied a top 10 place, but still did well enough to make LM the most successful British girl group in USA EVER in terms of chart placings — as well as THE first girl group ever to have their first 3 albums start in the top 15!). In UK, it even outsold 1D's final album before their hiatus! It also led to LM's first world tour, which had gigs in UK extended, selling over 300,000 tickets, and the first worldwide gigs, including a couple in Europe upgraded because of the demand.

Glory Days became the band's first UK no. 1 album, and was the fastest selling album in the country since David Bowie's death. It was also in the top 10 in over SIXTY worldwide iTunes charts. Whilst it didn't do as well in USA as the preceding 3 albums, Little Mix became the second girl group after TLC to have all their first 4 albums in the US top 30. They did, however, join the US leg of Ariana Grande's tour, before headlining an arena tour in the same areas where the preceding album's tour took place. In Europe, bigger venues were used than the previous tour, and there were extra gigs for UK and Australia, as well as a "summer tour" in British stadiums.

They released a 5th album, taking advantage of the practice hashtags when an act works on an unnamed album to call it LM5. Opened with a dream collaboration with Nicki Minaj, and with some powerful and frank songs, it was acclaimed, but the band were removed from Syco days before its release and it didn't fare as well in charts, and had only one follow up. However, Leigh-Anne and Jade climbed Kilimanjaro for charity, they released "Bounce Back" penned by ex-5H member Normani, and had their largest tour of UK, mainland Europe, and Australia yet, but just 4 days before it began, Jesy released a powerful confessional documentary, supported by her bandmates, about the previously undocumented effects the abuse she received for her body shape during X Factor and its immediate aftermath had on her mental and physical health and confidence.

Following this, they released a Christmas song, written solely by Leigh Anne, though that made little impact. However, they had a top 10 single for the 10th consecutive year when they released Break Up Song in spite of having to put their new BBC talent show The Search on hold due to the Coronavirus debacle, and having to make a part-animated video for their new song as a result.

In November 2020, it was announced that Jesy would be taking a hiatus for medical reasons. A month later, on December 14, Jesy officially announced that she was leaving the group to deal with recent mental health struggles, with the remaining members continuing as a trio. Nelson's departure was followed by the release of their first Greatest Hits Album, Between Us, announced on the tenth anniversary of their formation as a group.

In December 2021, the group announced they would be taking a hiatus following the conclusion of their 2022 Confetti tour.

Shout out to my Ex is directed towards the girls' ex-boyfriends but is also a not-so-subtle jab towards Perrie's ex-boyfriend, Zayn Malik.

Shout out to my Ex is directed towards the girls' ex-boyfriends but is also a not-so-subtle jab towards Perrie's ex-boyfriend, Zayn Malik.