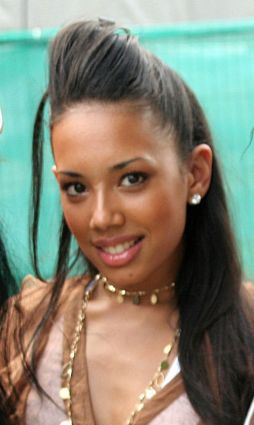 Jade Louise Ewen (born January 24, 1988) is an English pop / R&B singer, actress and member of the current (ie. 2009-) lineup of Sugababes. She has a Scottish mother and a Jamaican father, which makes her substitution for former member Keisha Buchanan all the more apparent since Keisha was also of Jamaican descent.

In 2003 and 2004 she played Aggie Thackeray, a British veterinary intern, on the Australian series Out There. The show ran for 26 episodes across 2 seasons and was regularly broadcast on The ABC. After the show ended, Ewen became a member of the Girl Group Trinity Stone, who disbanded two years later without releasing any music. However, she did keep herself busy after the group's split, releasing singles under an independent label and writing songs for artists such as Jessica Mauboy. She also appeared in shows such as The Bill and Casualty.

In January 2009 Ewen was selected to represent the UK in the Eurovision Song Contest. She sang a song entitled "It's My Time" written by Andrew Lloyd Webber and placed fifth, the highest placing for the UK since 2002. The song also peaked at #27 in the UK singles chart.

Later in 2009 Ewen had planned to properly launch her music career with a single called "My Man". A crunky R&B offering suited for rhythmic radio, promotions for the single were cancelled when it was revealed Ewen had been chosen to replace Keisha Buchanan following her controversial exit from Sugababes. Ewen had effectively joined the group in the middle of their Sweet 7 album campaign, and the album had to be wholly rerecorded with Ewen's vocals. Ewen attained two UK top 10 singles with the group from that album and released one free promotional single ("Freedom") in 2011.