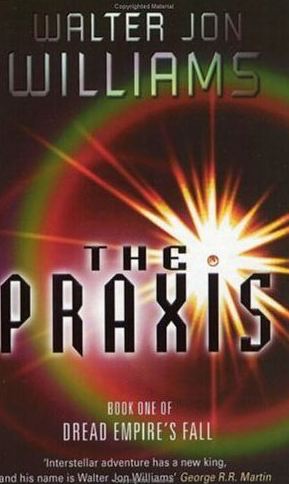 A fairly hard space opera trilogy by Walter Jon Williams, comprising The Praxis (2002), The Sundering (2003), and Conventions of War (2005).
Advertisement:

Dread Empire's Fall is set in the far future. For thousands of years, a large interstellar empire comprising of all known intelligent life forms has been ruled over in a strict hierarchical manner by the Shaa. At the opening of the first novel in the trilogy the Shaa are all but extinct - having chosen to commit suicide out of boredom. The aristocrats responsible for running the Empire are seemingly more concerned with lining their own pockets and the whole edifice starts to crumble fairly quickly with Civil War breaking out shortly after the last master is interred.

The plot follows the progress of Lord Gareth Martinez, an ambitious space navy officer always looking out for advancement and Lady Caroline Sula, a cadet in the same navy mostly looking to protect her deep dark secrets.

A one off story covering Sula's time on Earth after the war,Impersonations (2016), was followed by a new series starting with The Accidental War (2018).

Has nothing to do with Dread Empire, a dark High Fantasy series by Glen Cook.

This work averts some of these tropes: