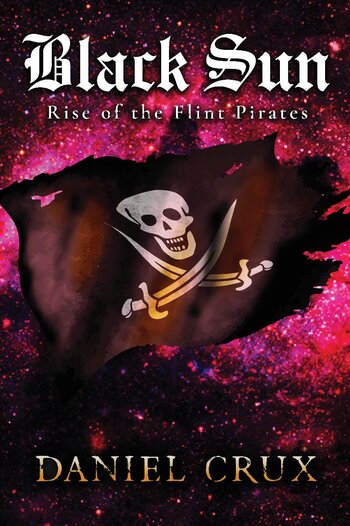 This is a tale set upon one such band...
Advertisement:

Black Sun is a series of Space Opera science fiction novels written by Daniel Crux, otherwise known by the screen name Wing Zero Alpha. The series is published through Inkwell Books, LLC and is available in both Kindle e-book and physical print.

It is somewhere around a couple thousand years in the future, during the Third Age of Terra. Due to a previous interstellar war that desolated Earthnote so much so that it effectively ended what we would consider the modern era, humanity would end up reforming into the prosperous but extremely xenophobic Terran Empire, which for the last nine hundred plus years has enjoyed a veritable golden age of advancement and expansion. As a result of that expansion however, as well as continuous rediscovery of humanity's past knowledge and culture, piracy would become rampant throughout space, eventually culminating in the development and formation of the Pirate Clans. One of these, the Gold Dragon Clan, would come to be founded and led by a Terran woman named Morganna Flint, who had long established herself as the most successful pirate of all time. And with that success, the Gold Dragon would also become considered the foremost of the clans.

However, that success would not last long. During a lone, and ultimately secretive voyage to the world of Ephesus, Morganna's flagship, the Morgan Le Fay, would be ambushed by an Imperial fleet. Though the events of this ambush are only marginally depicted, the battle would end with a terminally wounded Morganna fighting her way to her ship's hangar deck, just barely manage to get her two children, Jonathan and Alexander, onto a shuttle and then send them out before at last detonating the Morgan. After that, the Gold Dragon would fragment and dissolve, leaving the Flint children effectively orphaned and alone in a hostile galaxy.

Fifteen years later, Jonathan and Alexander have grown into relatively successful pirates (actually mercenaries) in their own right, managing to etch out an existence for themselves. Unfortunately, this would be an empty existence at best; though they have garnered a fair amount of wealth and prosperity, they are forced to take jobs from the most unsavory of clients while constantly being on the run due to their surname and their late mother's long list of enemies (in other words, simply surviving and nothing else). This is best depicted with their latest assignment. Despite their accomplishing it, their client, an Imperial Senator, would attempt to assassinate the brothers upon their return - not because he can't afford their rate either, but to illustrate what the brothers may expect of him should they enter his service on a permanent basis (long story).

Then, all at once, everything would change for the Flints. Through a chance encounter, Jonathan would end up coming to the defense of a mysterious woman against a squad of Imperial Marines - an act that all who knew Jon would agree was highly uncharacteristic. As a result, the woman, known only by the name Lorelei, would take a special interest in the Flints and so hire them for an assignment of her own. An assignment that would begin with the hijacking of a prototype Imperial warship from one of the most secure and heavily defended installations in the galaxy...

The series is laid out as so: