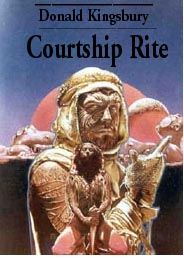 The Death Rite shall be invoked only in the case of heresy, and shall consist of no more than seven trials, for would not an endless trial become persecution? Though each trial conjures a more subtle death, each death, even to the seventh, shall leave open an escape that can be perceived by an adept of the common wisdom, for is not the common wisdom a memory of the Race's escape from Death? As is it not the common wisdom we are protecting when we challenge a heretic?
—From The Kaiel Book of Ritual
Advertisement:

Courtship Rite is a Science Fiction novel by Donald Kingsbury; a complex, richly-imagined story about the Lost Colony world of Geta.

Trapped for many centuries on a hostile world, the people of Geta have developed a tribal, ritualistic society. Native Getan life is inedible and usually toxic, and the colonists only brought a few Terran species: bees and several varieties of plant. Cycles of famine have forced them to come to terms with cannibalism, and it is now an integral part of their society, though different tribes approach it differently. The Getans have forgotten their history, and much of science, but of necessity, they have retained an amazing expertise in biology and genetics, and associated technologies.

Society has evolved into underclans, who do the work, and overclans, who rule and administer. The Kaiel are an overclan who believe it is their destiny to rule the world, not through force of arms, but through intelligence and persuasion and well-chosen alliances. The Kaiel are actively breeding themselves for the ability to make accurate predictions—or for the ability to make predictions come true through intelligence and persuasion.

Hoemei, Gaet and Joesai maran-Kaiel are three sons of the former Prime Predictor of the Kaiel clan. The three have two wives between them, and are hoping to add a third to make a Six-marriage. The new Prime Predictor finally agrees, but orders them to marry the clanless Oelita, known as the Gentle Heretic, who preaches against cannibalism. Reluctant and mildly offended, the brothers decide to court Oelita with the ancient Death Rite, to force her to prove her worth to be their spouse. But Oelita has no interest in marrying them in the first place.

The book was written in part because Kingsbury thought it would be fun to write a book where cannibalism was a positive thing, and make the reader agree. Robert A. Heinlein expressed similar motives for writing Stranger in a Strange Land, but unlike Stranger, Courtship Rite makes cannibalism a major theme of the story. It was nominated for a Hugo Award in 1983.