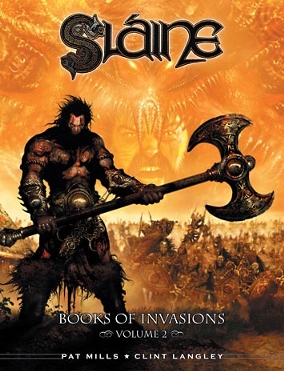 Hard bony limbs covered in leathered skin
Behind his eyes with the rage of ten warped men
Without a sound he steals right through the night
The sign of death to him brings grim delight
Those marked for death can feel him coming near
Some stand in fight and some just cry in fear
On a horse black, the dark lord takes to flight
But no one forgets the Highlander rode tonight
— "Highlander"

Sláine is one of the titles published in 2000 AD, focused on the fantastical adventures of Sláine mac Roth, an Irish Celt who can best be described as as a cross between Conan the Barbarian and Cúchulainn, the mythological Irish hero from the Ulster Cycle.

Initially an outcast exile for his seduction and impregnation of the intended future bride of the Sessair tribe's king, the strong-willed Niahm, Sláine roamed the Land of the Young with only his axe to defend him and the perverse dwarf Ukko for company. Rescuing a maiden doomed to sacrifice in a Wicker Man earned him her eternal enmity, for she was the witch Medb, disciple of the Lord Weird Slough Fegh, and devotee of Crom Cruach. When he returned to his tribe, Sláine became their king and the High King of the Tuatha de Danaan, leading wars against the demonic Formorians and Golahms, and traveling through time at the behest of Danu to interfere with the prehuman alien gods known as the Cythrons.

After nearly 40 years of publication, Sláine finally came to an end in 2021 with the Dragontamer story arc.