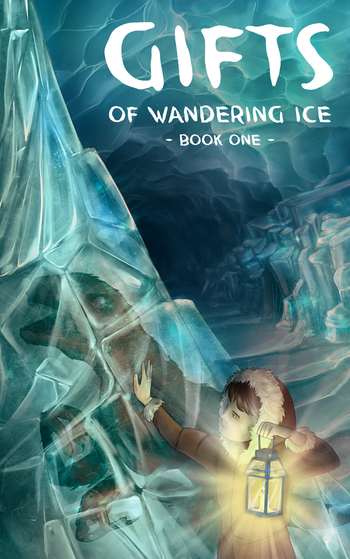 Rikter: How was it? Well... Five little hunters came to the shore. / One found the ice gift and then there were four. / That's what we hunters now teach our kids: / You want to live? Don't touch the ice gifts.
Tanya: And do you know the story behind this verse?
Rikter: Well, each family has a story to match it. We've got the biggest island, so we get most of the "gifts".
Advertisement:

Gifts of Wandering Ice is based on the short novel written by Olga Makarova (Mildegard), though the story differs a bit. Both the art and English translation were made by the author of the original novel.

The old world is dead. A catastrophe of forgotten origin has wiped out the old civilization, followed by an ice age. And then—a thaw, when water levels rise tremendously and even ancient icebergs begin to melt. People of this post-ice age are peaceful and remember very little of their history. They can only guess what it was like by the 'gifts'—objects and creatures wandering icebergs bring to their shore each spring. Sometimes these 'gifts' are dangerous, or even alive.

You can read the comic in English

on its own website, or in English on ComicFury

There is also a side story with its own page, entitled Ice Gift.

And there's a choose your own adventure game based on the comic, also available in English (Ice gift hunt)