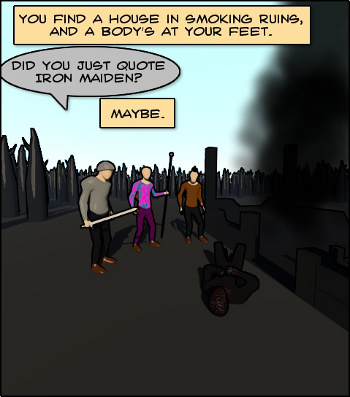 A relatively recent webcomic, Generic Title (subtitled The Quest for Grøn) was inspired by DM of the Rings and Darths & Droids. As opposed to either of those, Generic Title was not a screencap comic, though - the images were 3D renders. The story was that of a fictional party of Dungeons & Dragons players in just as fictional a campaign.

The distinguishing trait was that during writing, when the script called for a roll, a die (or several if needed) was rolled. As a result, the story is relatively unpredictable.

Unfortunately the author put the work on indefinite hiatus

in December 2015 and the domain expired in 2016. The comic can now only be accessed via the Internet Archive here.