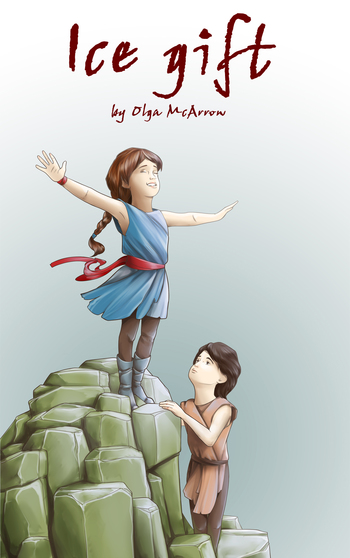 "Ice Gift" is an illustrated short story Gifts of Wandering Ice (sci-fi webcomic) is loosely based upon.

In a postapocalyptic world, melting icebergs bring ancient things to the shores where the last people live. One of those gifts turns out to be a living man.

Unlike "Gifts of wandering ice" which is an epic story with dozens of characters and many intertwining plot lines, "Ice Gift" is a short, simple story with only four characters in it: Elie, Rikter, Aimek, and Kalare. Aimek is absent in "Gifts of wandering ice", Rikter has a different personality in the comic, Elie becomes a living ice gift (partly taking Aimek's role), and Kalare is a scientist, not just a wise old woman.