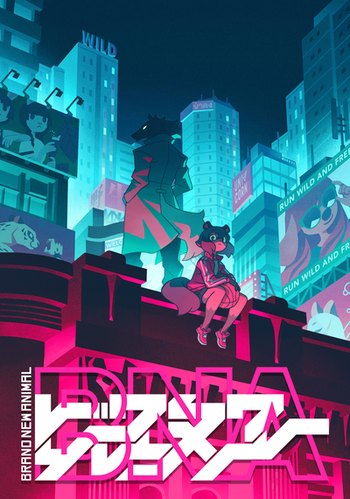 RUN WILD AND FREE
Hey! Are you ready to go?
— "Ready to", the opening theme
Advertisement:

BNA: Brand New Animal is a 2020 anime produced by Studio TRIGGER, directed by Yoh Yoshinari (Little Witch Academia) and written by Kazuki Nakashima (Tengen Toppa Gurren Lagann, Kill la Kill, and Promare). This is the first time Yoshinari and Nakashima have helmed a work together, as Nakashima is best known for collaborating with Hiroyuki Imaishi on directorial duties. The series also drew attention pre-release for TRIGGER collaborating with Western artists Genice Chan

In a universe where anthropomorphic animals called "beastmen" inhabit Earth alongside humans, an Ordinary High-School Student named Michiru Kagemori has her whole world turned upside down when one day she mysteriously turns into a tanuki. Searching for a cure to what she thinks is a disease, she travels to Animacity, the one place in the human world where the persecuted beastpeople can live freely. Or so she thinks; despite Michiru's previous assumptions and the best efforts of the mayor, Animacity is dominated by organized crime and outside pressure from humans who resent its existence.

While residing in the city and searching for answers to what happened to her, Michiru finds herself tangled up with the lives of Animacity's denizens, including the seemingly immortal wolf detective Shirou Ogami. However, as she stumbles her way closer and closer to truth, she not only has her prejudices about beastpeople challenged, but also comes to realize that her strange transformation may be linked to a distressing, world-changing revelation.

The series is distributed by Netflix, with Netflix Japan releasing the first and second halves of the show on March 21, 2020 and May 6, respectively; the series was released internationally on June 30. It also aired on Japanese television via Fuji TV's +Ultra block from April 8 to June 24. A light novel prequel, BNA Zero: The Animals That Can't be Brand New, was released April 23, while a manga adaptation set between episodes 3 and 4 began serialization in July.

For another grittier take on anthropomorphic life that also was picked up by Netflix and aired on +Ultra, compare and contrast Beastars. For an older, somewhat different perspective on furry cop anime featuring both kemonomini and anthro characters, check out Hyper Police.