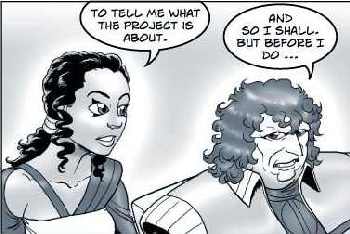 Taking place in the year 2523 C.E.(566 S.A. or Space Age), the tale follows Nicole Oresme, a girl who has an emotional breakdown following a sudden breakup with her boyfriend Philbert, resulting in her losing her job for not showing up. Figuring that she ought to get her life in shape, she decides to get a new job from a certain Dr. Seamus O Murchadha. In her meeting with Murchadha, she finds out that the job involves experiments having to do with some strange process the Doctor calls "quantum vibremonics"; he wants her to help him in continuing these studies.

The offer seems pretty good, as Nicole would get a fairly high-paying job with a boss who respects her. Furthermore, she would get to travel to many exotic locations across the solar system as the job demanded. But the job turns out to be far more dangerous than Nicole anticipated; following a near-fatal experiment close to the surface of the sun, she has several attempts on her life by assassins of unknown employment and purpose. It appears that Murchadha's experiments are attracting some unwanted and hostile attention....

Following the conclusion of Dr. Murchadha and Nicole's adventures, a centuries-long Time Skip ensues. We are introduced to a new cast of characters in a very different location, focusing on Bok and Zander, longtime friends, as they slowly uncover a conspiracy controlling their lives and those of the people around them. This section was officially titled Quantum Vibe: Venus 23, and then started the Quantum Vibe: Assimulation arc, covering the adventures of Murphy, a new artifolk named Hugo, and one of Nicole's distant great-grandchildren, Eithne. The Assimulation arc has now closed and the series will shift to focus on Venus 23 again.

The strip updates three times a week, with occasional interruptions announced by the author. Here

is the first strip, and here