Literature / The Given Day 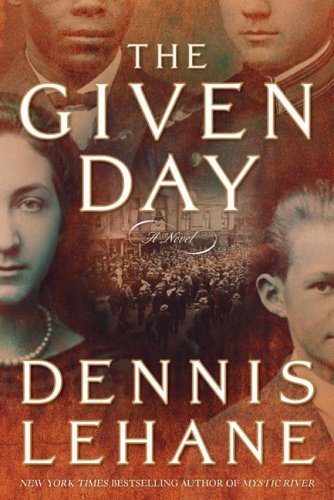 Oh, that thick crowd's just waiting for tickets to the theater.

"...Chicago is a new city, gentlemen. The fire wiped it clean of history, of values. And New York is too dense, too sprawling, too crowded with the nonnatives. They can't maintain order, not with what's coming. But Boston... Boston is small and untainted by the new ways. Boston understands the common good, the way of things. To our fair city, gentlemen. Ah, she's a grand old broad."
— Capt. Thomas Coughlin
''When Jesus comes a calling, she said,
He's coming 'round the mountain on a train.''
— Josh Ritter, "Wings"

The Given Day is a critically acclaimed novel written by Dennis Lehane in 2008. It's set in Boston around the end of World War I, a time of great political and social turbulence. A pointless war. A crappy economy. An angry populace. Workers' unions. Strikes. Corruption. Immigration. Racism. Class warfare. Terrorism. Bombs. Terrorism. Babe Ruth puking. Oh... and that's just how it starts.

The story is told from the perspective of two main characters. The first is Aiden "Danny" Coughlin, an Irish-American patrolman for the Boston Police Department. Danny's the son of Police Captain Thomas Coughlin and a rising star in the department, regularly infiltrating unions and other "subversive" organizations undercover. He is also a member of the Boston Social Club, a union of policemen right pissed over insane work hours, deplorable working conditions, and no raise in 15 years. Danny soon becomes the de facto leader of the B.S.C. and not only butts heads with the government over their rights, but members of his own family as well. As the government refuses to meet the union's demands and the union is left with ever fewer options, it isn't long before a police strike appears inevitable. Meanwhile, Danny's (not so) secretly in love with the family's Irish servant girl Nora, who has a past.

The other main character is Luther Laurence, an African-American amateur baseball player from Ohio who moves to Tulsa, Oklahoma with his pregnant girlfriend Lila. A (not quite) shotgun wedding later, they're married. In spite of Tulsa's very much true reputation as a decent city for blacks at the time (it wasn't called the "Black Wall Street" for nothing), Luther comes under the employ of a local gangster named Deacon Broscious. It isn't long before things go way downhill for him, and he is on the run. His and the other main character's paths finally cross in Boston, where his problems only get even worse.

The novel neatly manages to handle issues of terrorism, race, and class warfare without devolving into an Author Tract. Every character, real-life or fictional, is given fair treatment in regards to their perspectives and motives. It's just a matter of what characters the reader finds more sympathetic than the others.

Currently has two sequels, called Live by Night and World Gone By, which follows Danny's youngest brother Joe Coughlin as he rises up the ladder of organized crime in the Prohibition Era and World War II.