Our Showers Are Different 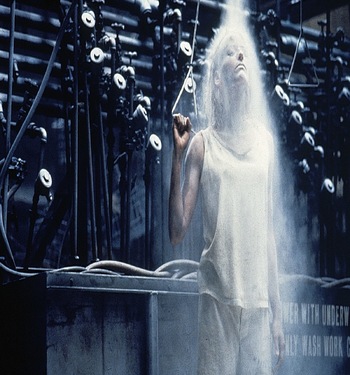 Nothin' rinses off the trail dust like some nice refreshin'... dust?!
Advertisement:

A trope of science fiction, if aliens (or humans in the future) bathe at all, you can bet that they will use something completely different from soap and water. This is usually not because of any Bizarre Alien Biology, but rather just something to show more advanced technology and/or how different the aliens or future humans are. It can also, depending on how sensitive the Moral Guardians are being, have the secondary advantage of letting characters have a shower without showing skin.

Note that this can be Fridge Logic when you realize that since water is recycled on spaceships and stations, there is no reason they can't spend the additional energy and equipment to have as much pure water as they want. If they don't clean the dirty water (and urine, etc.), they still have to store it (or throw it into space). It makes more sense to clean it and reuse it. Humans actually "make" water (oxygen plus glucose equals carbon dioxide and water). Although if you do allow water showers you probably have to provide more water storage space. Of course, depending on the level of technology (or how grimy your setting is), you can justify this by having the recycling process be time-consuming compared to how quickly you would use the water by washing everything with it.