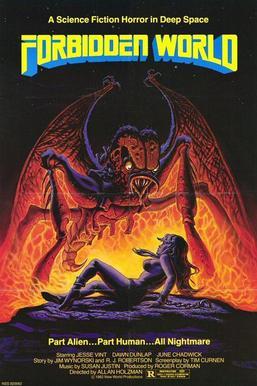 Forbidden World is a 1982 sci-fi/horror film produced by Roger Corman and directed by Allan Holzman.

In the distant future, on the way back to Earth, bounty hunter Mike Colby and his android companion SAM are diverted to the remote planet Xarbia. There, a research facility has accidentally created a horrible monster called Subject 20. Shortly after Colby's arrival, the creature proceeds to decimate the lab's staff and becomes bent on converting them into a source of food.

The film utilized many of the same sets as Galaxy of Terror, which is standard Corman procedure for you.

Not to be confused with Forbidden Planet.