Series / The Girl from Tomorrow 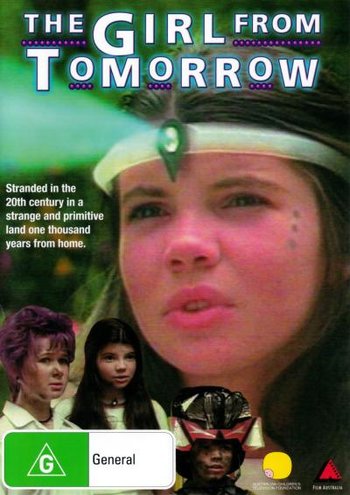 Australian series from the early 90s.

Alana is a girl living in the year 3000, whose guardian Tulista is sent on a Time Travel mission to the twenty-sixth century. After realising that Tulista may not even survive the mission, Alana breaks into the time travel facility place (which is never given a proper name), only to see Tulista leave. The Time Capsule returns almost immediately, with a new occupant, Silverthorn, who takes Alana hostage and goes back to the year 1990.

Alana, thinking Silverthorn dead, leaves the capsule and meets up with the Kelly family, who take her in. It doesn't take much convincing for them to realise that Alana is capable of doing some very odd things, and must be returned to the capsule before it automatically returns to the thirty-first century.

But, alas, Silverthorn is really Not Quite Dead, and has used the Capsule's computer to become incredibly dangerous...

The series was followed by Tomorrow's End, in which Alana takes the wounded Jenny Kelly back to the year 3000 to heal her. Then she discovers that she's created a whole new future, and is forced to return Jenny and Silverthorn to their respective centuries... only to discover that this was Silverthorn's plan all along.

The Girl From Tomorrow contains examples of: