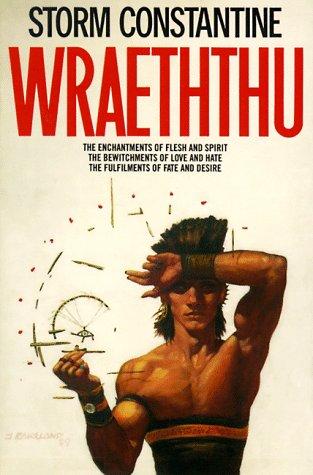 Likely the only Storm book you've ever seen in a store.
Wraeththu is a post-apocalyptic series by Storm Constantine. It was the author's first work and is probably the most widely known and most popular of her works. The series consists of six novels, the first trilogy written in the 1980s. Storm revisited the series in the early 2000s, revising the first trilogy while expressing embarrassment over her early writing, and writing a second sequel trilogy that also explained and expanded upon some of the unanswered questions of the first trilogy.
Advertisement:

After the End, human society has completely broken down. Without national governments, communities have become small, localized, and increasingly xenophobic. A problem that is only made worse by a threat known as the Wraeththu. Everyone knows that they will steal your sons and kill you and your family.

Pellaz is the son of Mexican sharecroppers, living with his parents and his five brothers and sisters on a plantation. His life is changed forever when a beautiful stranger named Cal rides through the area in need of a place to stay. Cal quickly seduces Pellaz and takes him away to a Wraeththu free-town called Saltrock. And it all only gets stranger from there.

There is also a Tabletop RPG adaptation, which is ... not universally admired. See one famous review here

The Wraeththu series contains examples of: