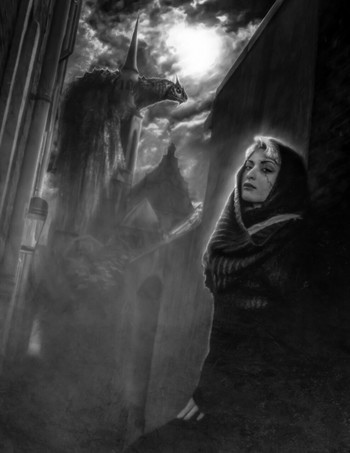 Welcome to the Lair.
Advertisement:

A Storytelling Game of Endless Appetite.

Beast: the Primordial is the tenth game line in the Chronicles of Darkness, and the first to be released since it changed its name from "New World of Darkness". You play a Beast, sometimes also known as the Children or Begotten. An embodiment of humanity's primal nightmares, your soul has been replaced by a primordial nightmare monster known as a Horror possessed of a deep-seated hunger. However, your hunger needn't manifest as direct hunger - it can be something like hoarding, or making someone understand they're prey. You must manage your hunger with care, choosing whether to satiate yourself and become more focused, or go hungry and become more dangerous. However, if you don't fulfill your hunger, your Horror will rampage through the collective dreamscape, disrupting people's lives and inducing intense nightmares, which will cause Heroes to awaken, hunt you down, and try to kill you.

One of the most notable features in this game is how Crossover-friendly it is: all previous entries in the Chronicles of Darkness were built with the possibility of being compatible, but Beast is the first explicitly designed to encourage it, giving the Begotten an entire set of powers known as "kinship" specifically designed to make them interact with other supernatural templates and dedicating an entire section of the book to explaining how they would interact with the protagonists of the other gamelines: the Begotten believe all supernatural beings (except Demons) are related to them, and as such treat them as kin.

The 99% complete public preview can be found here

. It was released as part of the Kickstarter for a deluxe edition

, which was fully funded in under a day. It went through multiple re-writing before the final version was released.

A supplement, titled Night Horrors: Conquering Heroes was later released. As suggested by the title, this book focused primarly on Heroes, the Beast's opponents, providing more informations about them and various sample characters. It also added a new type of antagonist, the Insatiable, best-described as the Beasts' Evil Counterparts.