Film / As Above, So Below 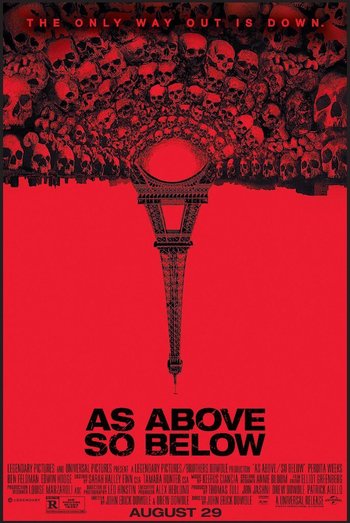 The only way out is down.
Advertisement:

As Above, So Below is a 2014 found footage horror film directed by John Erick Dowdle and written by Dowdle and his brother Drew.

The film revolves around Scarlett Marlowe, a professor and historian, and the culmination of her lifelong quest to find the fabled Philosopher's Stone. The sum of her research and explorations leads her to believe that the stone is hidden deep in the catacombs underneath Paris, where six million people have been laid to rest. Accompanied by her lifelong friend, a film director recording her quest, and a trio of locals who can break them into the catacombs, Scarlett descends beneath the city. But once inside, the group becomes the target of a supernatural force, using the errors of their pasts to haunt them.