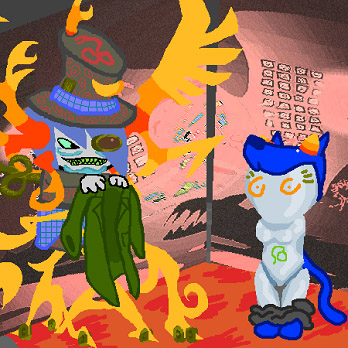 They were never meant to win.

is an interactive comic based on Homestuck, and more precisely on the Hivebent arc, written by Cauchemar. It details a troll session of SGRUB parallel to the canon team.

Focusing on a group of trolls meant to parody various fandom and fan session archetypes, Alabaster is about how one troll wanted to speedrun SGRUB on the hardest difficulty he could muster, bringing his friends and acquaintances along for the ride. As it is a horror story, this plan goes completely wrong in the bloodiest, most terrifying way possible.

Like its parent series, the comic contains multiple Flash games and movies (the most popular one being Silent Hive) and Art Shifts.