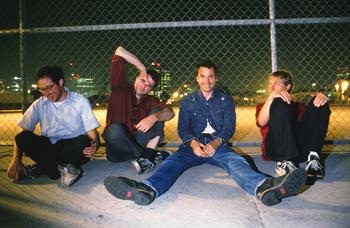 Lifter Puller (or LFTR PLLR) was a cult 20th-century Art-punk/New Wave band of the Minneapolis/St. Paul area, now known primarily for the early complexity of Craig Finn's lyrical work, as well as the instrumentation of the rest of the group—combining angular synths, a distinct lack of choruses/typical song structure, and, as Pitchfork described, being "all about the feeling of Now-Fucking-What Panic."

They're also known for being the earlier band of Craig Finn and Tad Kubler, who would both later form The Hold Steady.

During his time at Boston College, singer/songwriter Craig Finn taught roommate Steve Barone to play the guitar. Shortly after graduating and moving to Minnesota in 1994 Craig (alongside drummer Dave Gerlach and future drummer/group photographer Dan Monick on bass) would work to release two 7" singles: Prescription Sunglasses / Emperor, and Slips Backwards / Nassau Coliseum. Craig and Dan would later form the group along with bassist Tom Roach. After calling on Steve to move from his home state of New Jersey to the Twin Cities, the group began playing live shows around town, opening for acts such as Sebadoh at First Avenue. The first record, Lifter Puller, was recorded in 1994-95 but would only be released much later in April of '97.

Having had many years to hone their craft, the group would release their second full-length, Half Dead and Dynamite, only five months after the first. Musically, the album is similar in terms of basic setup: a noirish Indie rock that provides a chaotic but fully-fledged backing to a series of stories strung together by the roughly-voiced Finn. Barone would also switch from being a full-time guitar player to being a half-and-half guitarist/keyboardist.

Roach would leave the band the next year to focus on Grad school, while newcomer Tad Kubler would make his live debut on Halloween night, 1998. Shortly before his arrival, the group would release a quick-and-dirty EP, The Entertainment and Arts.

Kubler would instead make his first recording appearance on their final LP, 2000's Fiestas + Fiascos. Considered by many to be the groups most quintessentially "theirs," the album takes the previous tendencies of Finn's lyrics and instead spins them into a full-length Concept album, using references to earlier material ("Star Wars Hips") to create a fictional story of several Minnesota locals and the destruction of a nightclub known more for debauchery than dancing, the Nice Nice. Save the occasional quiet moment, say, to savor a crackhead's post-bathroom-coitus breathing ("Candy's Room") or to paint a stark image of abuse and consequences ("Katrina and the K-Hole"), the story is loud, vibrant, and ends in what sounds like your record player burning itself to death.

The band would break up that Summer. Finn (and later Kubler) would move to NYC and begin focusing on other projects. A compilation of their first two albums, as well as several rarities (and even a few new tracks), Soft Rock was released in 2002. At the time, it was the easiest way to access such a breadth of material (as well as access several compilation-only tracks). The group would also occasionally reunite around this time period, once in 2002 in New York City and once more in 2003 with the re-opening of the Triple Rock in Minneapolis.

In 2009, a book compiling lyrics, historical context, and stories alongside photographs of the band at the time (some from Monick, others from fans and the rest) titled Lifter Puller Vs The End Of was released as well as re-releasing the band's entire discography (save one lost recording, "Bitchy Christmas") digitally. Every song of theirs can be found from digital retailers now, including several live tracks from each of their non-debut releases. All of the bonus rarities from Soft Rock were released on a new album, Slips Backwards, which also included digital versions of previously vinyl-only singles.

One more reunion would follow in 2014 for the band's friends Dillinger Four at their "D4th of July" event, as well as two more in 2016—one at the "Minneapolis Showcase" at Red Rocks Amphitheater in Colorado, and once more opening for The Hold Steady (!) at their own "Brooklyn Bowl" reunion shows.

"I want Nightclub Dwight dead in his grave / I want the Nice Nice up in blazes..."