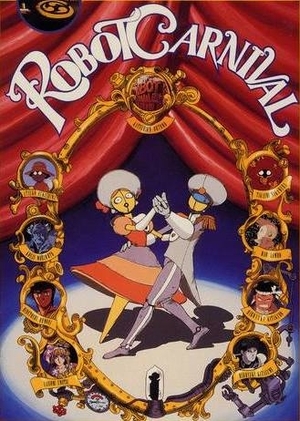 Robot Carnival (1987) is an anime anthology film, produced by APPP, comprised of a collection of nine short films about robots by a variety of directors, most featuring no dialogue. Many of the film's segments are directed by people who are primarily character designers or animators, not directors.

The bookend segments, "Opening" and "Ending", feature a huge machine, the eponymous Robot Carnival, chugging along over a post-apocalyptic landscape unheeding of any obstacles in its way. Once a magnificent showcase of mechanical prowess, the hulk is now a decayed, rusting, malfunctioning engine of destruction.

During the early 1990's, this anthology was shown frequently on the Sci Fi Channel and later on the Turner Network, often paired with other feature-length anime films such as Vampire Hunter D, Demon City Shinjuku, and Twilight of the Cockroaches,Explanation Segments of it were often used to pad for time when the feature ran short of making it to the next half-hour mark. making Robot Carnival one of the first tastes of anime to many American viewers.

Due to its nature as an anthology, the tropes have been sorted by the individual stories.

open/close all folders
Unsorted/Other
This is for entries that have not been sorted into the other folders, or ones that do not fit into a single folder.
Opening
Franken's Gears
Advertisement:
Deprive
Presence
Star Light Angel
Cloud
A Tale of Two Robots/Strange Tales of Meiji Machine Culture: Westerner's Invasion
Nightmare/Chicken Man and Red Neck
Ending