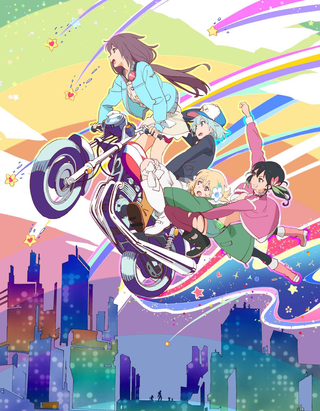 "Rolling, Falling, Scrambling Girls. For others. For themselves. Even if they're destined to be a 'mob'."
Advertisement:

Ten years after the Great Tokyo War, each of Japan's prefectures have broken off to form their own separate nations. Using superpowered combatants known as "Bests", various territories and clans fight for control.

The Rolling Girls focuses on Nozomi Moritomo, an average teenager who helps clean up after Best conflicts. When her hero, a well known Best by the name of Maccha Green, is injured during battle, Nozomi and three other girls (Yukina Kosaka, Chiaya Misono and Ai Hibiki) set off to help mediate the land disputes that Maccha Green usually settles.

Created by Studio Wit (the studio behind Attack on Titan), the series began airing in Japan in January 2015, and is currently available for streaming on Funimation's site

in the US and Canada.

The Rolling Girls provides examples of: