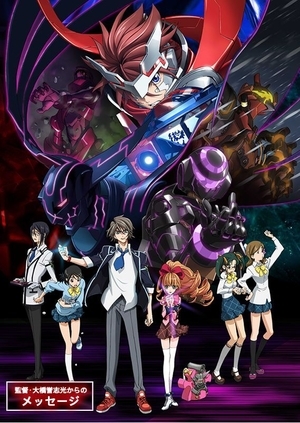 ...Oh, where do we begin with the synopsis?

An Anime First series by Sunrise that premiered in the Summer 2011 season alongside the second half of Tiger & Bunny.

Seventeen years ago, a meteor fell from space, scattering a bunch of rare jewels around Japan known as "Dark Stones." These stones provide tremendous power to whoever touches them, but also have a bad habit of driving the user insane. Fast-forward several years: a loner named Alma goes to school despite being accused of sending 19 kids to the hospital all at once. An amazingly rich woman named Ruri and her butler Makoto ask for his help. With the power from her "Soul Stone," he can wield the power of the "Sacred Seven" and destroy the Dark Stones.

But of course, everyone has their own agenda involving the Dark Stones. Even Alma's newfound friend.