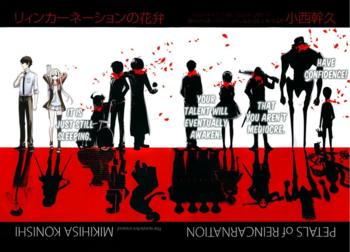 If you have talent, what will you do?
Advertisement:

Reincarnation no Kaben (リィンカーネーションの花弁 ; Petals of Reincarnation) is a manga created by Konishi Mikihisa. It is in an ongoing status, and the author post new chapters on his official Twitter

The story follows Touya Seiji, a high-school student who has excellent academic results but is never satisfied due to his inferiority complex born of years of being compared to his incredibly talented older brother by their family. Desiring talent over anything else, Touya crosses paths with his absent classmate Haito Le Buffet.

Later on, he found out that she isn't just someone who has talent, but someone who "took" the talent of herself in her past life through the Branch of Reincarnation, a tool allows them to get a hold of a talent from a previous life. And, those who "took" the talent from their past lives, are also known as "Returners. What talent will he be returned, and what kind of Returner will he be once he becomes one of them?

Reincarnation no Kaben contains examples of: