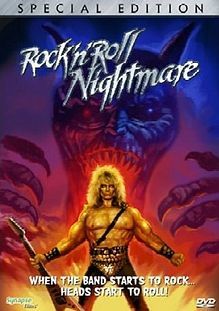 It sounded like the scream came from down there ... Right, let's look upstairs.
— The flawless logic of John Triton

Rock 'n' Roll Nightmare (a.k.a. The Edge of Hell) is a 1987 horror film directed by John Fasano, and starring Canadian bodybuilder/heavy metal singer Jon-Mikl Thor as, well, a heavy metal singer named John Triton. Whose band also happens to be called the Tritonz.

The Tritonz are on their way to an isolated farmhouse in Canada, much to almost everyone's chagrin, but for band leader and lead singer John Triton, it's all in the best interests of creating music with the least possible distraction. But instead of having lots of time to record a little music and make sure it's perfect, the band runs into all sorts of distractions — those of the sexual nature, but mainly those of the demonic nature.

Like a good many horror films, Rock 'n' Roll Nightmare has an unusual Twist Ending, and has also developed a cult following as a "metalsploitation" film with all the requisite '80s Hair Metal stereotypes in spades. Director John Fasano also helmed another such film a year later, the similarly schlocky Black Roses.

WE LIVE, WE LIVE TO TROPE!