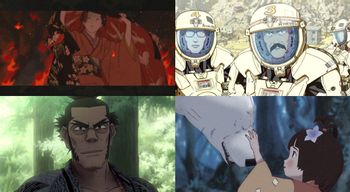 Short Peace is a five part anime anthology, and the fourth anthology created with Katsuhiro Otomo after Robot Carnival, Neo Tokyo (1987) and Memories. Uniquely, instead of another anime short, the fifth part is a video game developed by Suda51's Grasshopper Manufacture.

It contains the following parts: