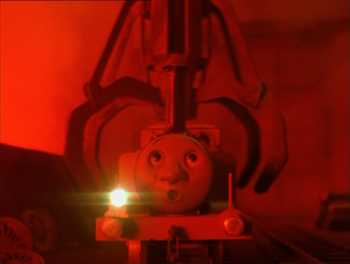 "THIS ENGINE'S NOT FOR SCRAPPING!!"
Advertisement:

Let's face it: nothing is scarer than a British animated series teaching you everything you need to know about the rail industry though an actually deathly island where perfectly sentient beings are cut up while still alive, abandoned for years in places where nobody else can find them while they helplessly rot away, other people's incompetence can get you killed and have you blamed for it, and even some of your coworkers are out to have you killed. This being the centrepiece of a children-focused franchise, it can often cross just as much lines as a normal train can go.

For examples related to The Railway Series, go here.