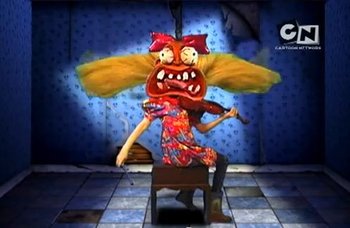 And this is just the tip of the iceberg....
Terror all around you, and we've just begun
You'll be a trembling helpless lump of fear when we are done
Grim unearthly creatures flaunting nauseating features
Make for ghastly midnight screechers,
You'll be speechless but for AAAAAAAAAHH!!!
—SpongeBob SquarePants, "The Legend Of Bookini Bottom"

Make sure the example you're adding is not already in one of the series listed above. If it is, please add it to that specific page.

Examples below are in alphabetical order. Please provide context or an explanation for your example, and do not simply add a link to a video of a scene you found scary.