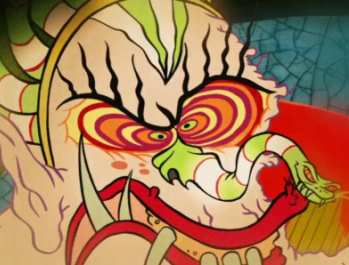 "Do not look in her eyes, lest you turn to stone!"
Advertisement:
Considering that Danny Antonucci previously made Lupo the Butcher and The Brothers Grunt, both of which were filled with Nightmare Fuel, it's not all that surprising to see moments like these on this show.
open/close all folders
General
Episodes and specials
Big Picture Show
Advertisement:
Other