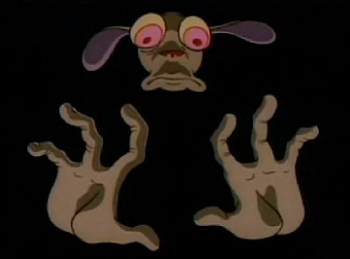 "And with these hands, I hold the fate of millions."

The Ren & Stimpy Show is one of the most controversial cartoons of the 90's, with all of its disgusting and terrifying imagery. Sometimes, the show intended to use these terrifying imagery or plotlines in most episodes, and we end up getting these. Take notice of how the Spümcø episodes ironically have FEWER examples than the Games episodes (the ones made after John K. was fired). However, there are more Games episodes than Spümcø episodes, so it's sort of justified.

The deranged duo's antics were intended to amuse us. Sometimes they frighten us, whether or not it was intentional. But we still loved them, of course.

The adult version has its own page and it really takes things Up to Eleven.