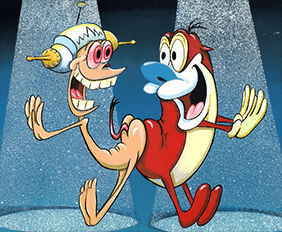 The Ren and Stimpy Show, putting the "Light" in Lightmare Fuel since 1991!

(Please note that because it has both Nightmare, as well as Nausea Fuelnote Along with the previously mentioned "lightmare fuel", YMMV on how "funny" [or not] these moments really are, especially since some moments were actually not intended to be funny at all [e.g., the infamous "Son of Stimpy" episode], while others are ambiguous as to which is which).