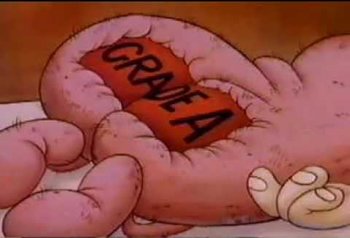 "Cat Hairballs" is a song and Album Single made for The Ren & Stimpy Show as part of the album Ren and Stimpy's Crock O' Christmas. The song is the second track on the album and was meant as a parody of "Jingle Bells".

In addition to appearing on the album, the song had its very own music video, which which came on the same tapes as the episode "Son of Stimpy" and played before the episode proper.

The song and music video are about Stimpy hwarfing up hairballs onto a conveyor belt for Ren, who is stamping them for approval and plans on using them for various purposes. However, the process of licking and hwarfing may prove too much for Stimpy, who starts running out of places to lick. In short, it bares a lot of similarities to the episode The Cat That Laid the Golden Hairball.

The video itself can be viewed on YouTube here