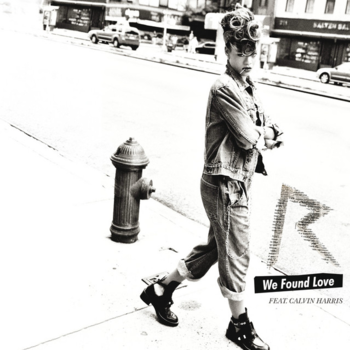 "It's like you're screaming, and no one could hear. You almost feel ashamed that someone could be that important, that without them, you feel like nothing. No one will ever understand how much it hurts. You feel hopeless, like nothing can save you. Then when it's over, then it's gone, you almost wish you could have all that bad stuff back, so that you could have the good…"
Advertisement:

"We Found Love" is a 2011 single by Rihanna and Calvin Harris. Released as the first cut from her album Talk That Talk, its music video was directed by Rihanna's frequent collaborator, Melina Matsoukas. It's widely believed that the visuals were partially inspired by the singer's highly publicized relationship with Chris Brown.

The video has received high critical praise, earning comparisons to Danny Boyle's magnum opus Trainspotting for its depiction of Rihanna and English boxer Dudley O'Shaughnessy as a couple in a drug-fuelled Masochism Tango. It went on to win the 2012 Video Music Awards for Video of the Year, as well as garnering additional nominations for Best Female Video and Best Pop Video. In the decade since its release, it's garnered nearly a billion views on Youtube.

"We Found Love" contains examples of: