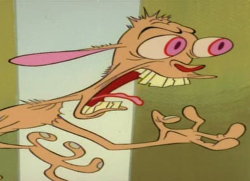 Ren’s natural state.
Voiced by: John Kricfalusi (seasons 1-2, Adult Party Cartoon), Billy West (his laughter and a few episodes in season 2; seasons 3-5, reboot), Alfonso Obregón (Latin American Spanish dub, both shows)
"They think I’m crazy. But I know better. It is not I who am crazy - it is I who am MAD!"

An Asthma Hound Chihuahua prone to psychotic breakdowns and acts of violence. Whatever he does, expect for it to be somehow materially motivated. 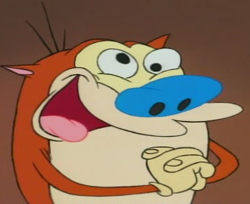 Stimpy is a overweight manx cat with no...er, well, let's say "little" brains and a big heart. Despite having to deal with Ren's insanity and violence, he manages to put up with everything. 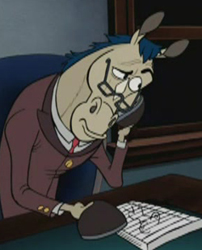 Mr. Horse is perhaps the Only Sane Man. But he might be the Ax-Crazy one, too. He was a doctor, a psychologist, note  "Psychologist? Are you nuts?" He's a horse! a psychically unbalanced creep, a war hero, a spokesman for the United Nations, an airplane pilot and many, many more. Who knows what he really is?

George Liquor is an American so conservative, he thinks Republicans are communists. However, that part of his character was expanded in his own cartoon, The Goddamn George Liquor Program and its spinoff comic - in The Ren & Stimpy Show, he's portrayed as a man with a strong faith in rules and discipline. He's only made 2 appearances on the show, due to the Nickelodeon execs' absolute condemnation for the character.

It's That Man Again

A smarmy, overly-enthusiastic travelling salesman who occasionally crosses paths with Ren and Stimpy. He also serves as the announcer for the Captain Höek cartoons.

A former cartoon producer, first introduced in the episode "Stimpy's Cartoon", to whom the years have not been kind. He showed up in a few other shorts as a stock "rambling, crazy old man" character.

A meat-worshipping reverend. Only appears in the episode "Reverend Jack". Voiced by Frank Gorshin.

A small ghost that spends his entire appearance trying to scare Ren and Stimpy and failing miserably. Only appears in the episode "Haunted House".

Yes, THAT Ralph Bakshi. He appears solely in Fire Dogs II, with Ren and Stimpy hanging out with him.