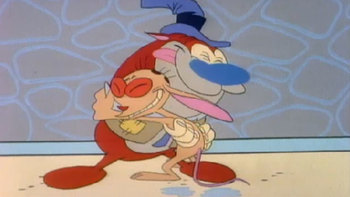 It's great to be home.
"Do you know why Ren and Stimpy is popular? It's not because of the gross stuff. It's because they love each other."
—Howard Beckerman (paraphrased)

The original show may have been filled with Nausea Fuel, Nightmare Fuel, and over the top insanity with its humour. But it wasn't without it's "heartwarming" moments. Especially between our two leads!

(Important note: Because the show had the above mentioned things, among others, it is very much YMMV on whether or not these actually count as "heartwarming", especially since many if not all of the "heartwarming" elements were actually forced on John K. as part of a compromise between himself and the network.note This especially applies to that infamous episode.)