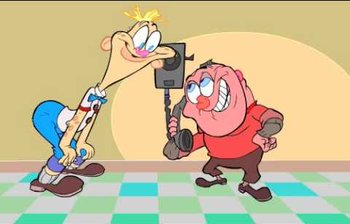 The cartoon's bare plot is a simple Slice of Life scenario. It starts on a sunny day, with George Liquor fetching his 8-year-old, freakishly tall, and mentally handicapped nephew Jimmy out of a hen house. George cooks him some bacon. The cartoon then trails off into vignettes involving Jimmy's girlfriend Sody Pop and George's other nephews, Slab and Ernie.

The main character later returned for a couple of Ultimate Fighting Championship promos and a few Adult Swim commercials with Slab and Ernie before having one more appearance in Cans Without Labels.