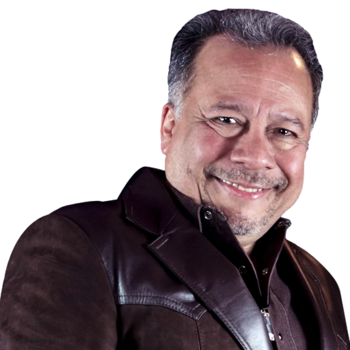 Francisco Humberto Vélez Montiel (born March 30, 1955 in Orizaba, Mexico), better known as Humberto "Beto" Vélez, is a Mexian voice actor. He's one of the most recognized in the media, in part thanks to his distinctive baritone voice, and for being the voice for Homer Simpson for the Latin American dub of The Simpsons (until he was dismissed for forming part of a strike against the studio, though he returned to voicing Homer in 2021 starting with Season 32). With almost 40 years in the trade, he currently dedicates himself to teaching the art of dubbing to younger actors interested on pursuing this career and assisting to conventions.

Besides his work on The Simpsons, he's the official Latin American Spanish voice for Winnie-the-Pooh (yes, he noticed the irony), the official Latin American Spanish voice for Nathan Lane and Danny Devito, and has dubbed Steve Buscemi and James Gandolfini a couple of times. If your character is a loud and bombastic baritone, a wisecracking Jaded Washout, an arrogant jerk, or a fat obnoxious Bumbling Dad, there is a big chance it's Vélez.

Vélez was once married to fellow voice actress Cony Madera, who with they had two children (Humberto, Jr. and Alicia, both of whom are voice actors in their own right). They have since then divorced.

As the VA for Danny Devito:

As the VA for Nathan Lane:

His voice roles include examples of: