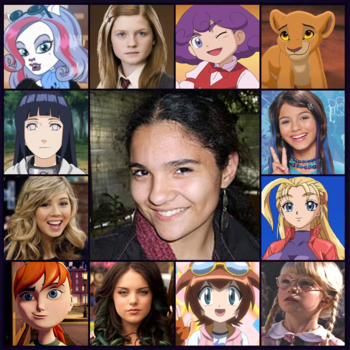 Alondra Hilgado (in the middle) and some of her roles
Advertisement:

Alondra Patricia Hidalgo Quintero (Born February 17, 1989), better known as Alondra Hidalgo, is a Mexican voice actor and director. She began her activity in voice dubbing from very young to one year old and although her activity in the specialty was not constant until about the year 1993 when she decided to enter professionally in voice dubbing. Her best roles are the Cool Big Sis, Shrinking Violet, Tsunderes and Tomboy

She and Víctor Ugarte have often voiced official couples.