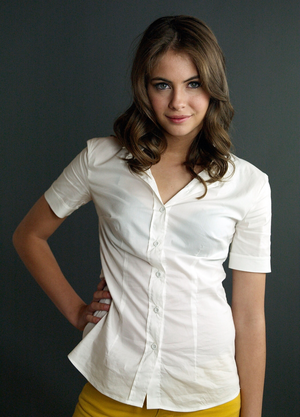 Willa Joanna Chance Holland (born June 18, 1991) is an American actress, voice actress and model, best known for her roles on FOX's The O.C. as Kaitlin Cooper, across The CW's Arrowverse as Thea Queen / Speedy, specifically on Arrow in a regular role, as well as in the Kingdom Hearts video game series as Aqua.

Her family is heavily attached to the show business. Her father, Keith Holland, is a cinematographer while her mother, Darnell Gregorio, is also an actress. She was also Brian De Palma's step-daughter for two years and has a half-sister from her mother's marriage to him.

Tropes about the actress: