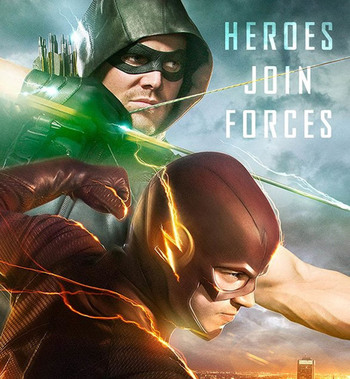 Carter Hall: [Kendra] You're Priestess Chay-Ara, I'm Prince Khufu, and we're lovers, soul mates. We've been partners for 4,000 years. We're drawn to each other in each life, and after we die, we reincarnate to find each other again and again and again. And now that I've found you, we should really get out of here...These people cannot protect you from Savage any longer.
Oliver: Do you know who Vandal Savage is?
Carter: In every lifetime, he hunts us down and kills us. He's done it 206 times, and I'm not planning to make it 207...His life force is tethered to ours. Every time he kills us, he becomes more powerful. You do the math.
Cisco: You're 0 for 206, and you still think you're her best bet, hmm?
Barry: Okay, so what we need to do is just find Savage and get rid of him.
Advertisement:

Heroes Join Forces is the second annual crisis crossover television serial, of The CW's Arrowverse once again told across The Flash and Arrow. It would be a Back Door Pilot for the third Arrowverse show, Legends of Tomorrow.

One night Cisco and his new girlfriend Kendra are attacked by a mysterious man calling himself Vandal Savage. Finding themselves outgunned, Barry recruits his friends from Team Arrow (and Malcolm Meryln) to aid them. They are aided by winged man calling himself Carter Hall. Turns out that he and Kendra are the reincarnation of an Egyptian Priestess and a Prince who've been hunted by Vandal Savage for millennia due to his obsessive lust for Kendra.