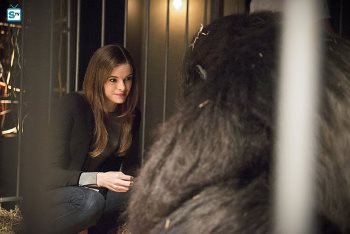 Still suffering the effects of his brutal beating at the hands of Zoom, Barry is forced back into action when Grodd kidnaps Caitlin.

At S.T.A.R. Labs, the team says Barry is almost healed and they want to help him. He still is having trouble breathing, and can barely walk. Wells comes in and asks them to help him head back to Earth-2 to try to stop Zoom. Everyone is up for it except for Caitlin.

Cisco gets an alert, but it's not urgent; it's about his date with Kendra. Barry gets a phone call from Patty and takes it; he's told her he's sick but she obviously doesn't know the details and she offers to bring him soup, which he declines. She's suspicious, but lets him go.

Caitlin goes to talk to Wells, and he's at a bar preparing to leave, scribbling notes. She tells him they can help him save Jesse, but he says he made a mistake coming to Earth-1 — that he doesn't have another plan. Caitlin tells him that the best way to save Jesse is to stay. He tells her to leave him alone, and that he needs to figure out which breach to use. Wells gets the idea that he has to close all of the breaches except the one at S.T.A.R.

Before their date can start, Cisco touches Kendra's hand and gets a vibe off of her, seeing a winged warrior. He tells her he has to go.

At a research lab, a scientist has a brief, strange vision and excuses himself. On the way out, he shatters a glass case, steals a canister and uses it to knock down another man who tries to stop him. Outside, he meets Grodd, who had been controlling him.

The next morning, Joe and Patty meet at the crime scene, where they see evidence that the scientist was killed by a metahuman. Joe excuses himself to check on Barry, saying that Barry wanted him to bring soup.

At S.T.A.R., Barry is on the treadmill, but when he starts to push himself he gets flashbacks to Zoom's attacks. He loses his balance and is thrown from the treadmill. He tells Joe that he feels like a failure because Zoom beat him in front of the whole city and now they don't have faith in the Flash.

In the S.T.A.R. breach room, Cisco tells Caitlin that he vibed on a bird-man. When he starts thinking maybe it's an angel, Caitlin gets the same vision as the scientist from before, then punches Cisco and leaves.

Patty calls Joe to tell him that first of all, the drugs stolen are used to enhance intelligence, among other things; and second that hairs found at the crime scene are gorilla hairs.

Joe comes to see Barry and Cisco, telling them that it's Grodd, just as Caitlin heads outside. They see on the security camera that she's being followed by Grodd, but neither are present when they get outside.

At S.T.A.R., Joe says he's going to look for information on gorilla sightings so they can try to track him to rescue Caitlin, who they think has been abducted. When Cisco and Wells go off to start work, Joe leaves Barry to try and figure out how they're going to subdue Grodd once they find him.

In a new lair — not his one from the sewers — Caitlin wakes up, and Grodd calls her name. She realizes that he remembers her, and he leaps down to stand near her. He says she was always kind, and that he needs help. He wants to know how he became what he is. He wants her to repeat the accident that created him so that there can be more like him. When she says she can't, he tells her to learn.

Back at S.T.A.R., a newly-motivated Barry is back on the treadmill, but turns it off when he starts to get speed lightning. His father shows up to talk some sense into him, and the two hug. In the other room, Joe congratulates Iris for bringing Henry.

After explaining Grodd's origin to Wells, Cisco asks what Wells is doing. Wells says he has an algorithm that can find Grodd — and it gets a hit. Cisco tells Barry they know where Grodd is. Barry still doesn't know how they're going to get Caitlin back, but Wells has an idea: dressed as the Reverse-Flash, they hope he can convince Grodd that he's the real deal and talk him into letting her go.

At S.T.A.R., Henry tells Barry that everyone stopped believing in him when he was convicted of his wife's murder — that he knows what it's like to have those judgmental eyes on you. Barry asks him how he got past that, and Henry says he embraced it, and that accepting it was the only way to move forward. If he could survive it and learn to believe in himself again, he could do anything. He says Barry helped him by never doubting him.

At Grodd's lair, Caitlin has a working theory on how to make more like Grodd. Before she can implement it, Wells enters and tells Grodd that he's back and they don't need Caitlin anymore. Grodd says that Wells never asked for anything, just took, and demands to know who Wells is. He throws Wells against the wall, and Barry tells Cisco, who had run to rescue Caitlin, that an overdose of the drugs Grodd stole could overload his brain and provide them cover for an escape. Wells stands up and, taking a more aggressive tone of voice, manages to fool Grodd into believing he's the Earth-1 Wells.

After delivering a monologue that sounds suspiciously like something the Earth-1 Wells would say, he sticks Grodd with a handful of needles and flees with Cisco and Caitlin.

Back at S.T.A.R., Caitlin patches up Wells. Joe suggests killing Grodd, but Caitlin objects, saying that he's lonely and sad. Wells says he has located a breach that will send Grodd to a suitable location on Earth-2, and Henry volunteers Barry to bait Grodd into the breach.

Caitlin lures Grodd out of his lair and Barry, in the Flash outfit, lures him in front of the breach. Once there, the plan is to blast Grodd to Earth-2 with a speed cannon. Barry shows up, chased by Grodd, and Cisco and Wells turn on the speed cannon. When Grodd hits Barry, he has a flashback to his beating by Zoom, but recovers when Caitlin provides cover. She tells Grodd that Flash was just trying to save her from Grodd, and isn't an enemy. She tells Grodd she can give him what he wants if he trusts her. Grodd approaches her, and Barry runs at her, dragging Caitlin away while the breach opens up and starts dragging Grodd. He resists, and Henry has to encourage Barry to kick Grodd into the speed cannon, sending the ape to Earth-2.

Back at S.T.A.R., Cisco is going to destroy the Reverse Flash suit, but Barry asks him to find out how to make it compress into the ring first. Wells says he can help, as he understand microtechnology. He tells them about the gorilla preserve where they sent Grodd, and says he's going to stay and work with Team Flash to close the breaches and rescue his daughter.

Back at home, Henry takes a number of childhood photos of Barry before he leaves town again. Joe tells Barry that Patty isn't dumb and isn't buying his story about being sick, and Barry says he'll tell Henry about the new girl on the way to the bus station. After Barry and Henry leave, Joe muses about what it would be like to have a son — something that tortures Iris a little bit since she knows he has one.

At Barry's lab, Patty confronts him about his lies about being sick. Barry says his dad was in town, and that he didn't tell her because he was convicted of murder. He apologizes for not having more faith in her, but she says it's not about Henry, it's about Barry and she needs to trust him if their relationship is going to work. They kiss.

That night after Jitters closes, Cisco brings Kendra a basket with chocolate and flowers, to apologize for bailing on their date. He tells her that there was a police emergency, and she says that working with them is very cool and brave. He's brought a digital movie projector with The Princess Bride on it so they can resume their date. Kendra reaches out to hold his hand, and he gets a much closer-up vision of Hawkgirl — now realizing it's Kendra. He reacts to it, and covers by telling her she's a great kisser. The two leave to watch the movie.

On Earth-2, Grodd is spit out into a jungle, where he sniffs and looks around. He sees a rock formation that looks like a gorilla, with a city beneath it, and roars.