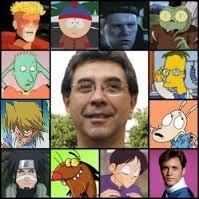 Carlos Inigo and some of his roles
Advertisement:

Carlos Íñigo Medina (December 13, 1960 — September 17, 2017) was a Mexican voice actor with over three and a half decades in the industry. Aside from dubbing work, he was a very talented locutor, music teacher and singer, but in his final years, due to his health complications he retired from locution and music to dedicate full time to voice acting. Among his most iconic roles are Katsuya Jonouchi (AKA Joey Wheeler) in Yu-Gi-Oh!, Rocko in Rocko's Modern Life, Daggett in Angry Beavers, Professor Frink in The Simpsons and Billy Cranston/Blue Ranger in Power Rangers.

His nephews Alfredo and Miguel Ángel Leal, and his niece Lupita Leal are also notable voice actors in their own right.

He had a rather similar voice to Alfonso Obregón Inclán (with Íñigo's voice being slightly more nasal and higher than Obregón's), to the point sometimes they substituted each other in some roles.

He passed away on September 17, 2017 due to cardiac complications.