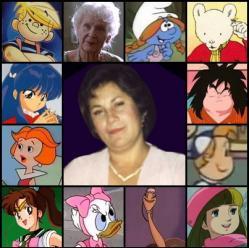 The late Araceli de León (in the middle) and some of her roles
Advertisement:

Yolanda Araceli León Rosas (May 26, 1951 - October 2, 1999), better known as Araceli de Leon, was one of the most popular Mexican dubbers in The '90s, especially due to her role as Makoto Kino (Lita/Sailor Jupiter to those more used to the pre-2014 English dubs) from Sailor Moon. Sadly, she died of a heart attack in 1999.

Her roles were either of the loud young boy or the tomboyish girls. She was succeeded in many of her roles by her daughter, Mariana Ortiz, and her son-in-law, Luis Daniel Ramírez.