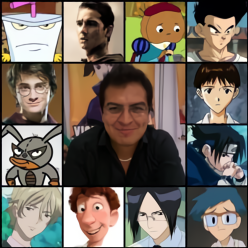 Víctor Ugarte (in the middle) and some of his roles.
Advertisement:

Víctor Ugarte Fonseca (born October 31, 1976) is a Mexican voice actor. Starting his career since the age of nine years old where he provided voices along with his uncle Eduardo Fonseca, most of his roles set him for teenagers or young adult male characters, specially if they have more than one psychological problem or are the Butt Monkeys of the cast.

Anime fans mostly recognize him as the voice of Shinji Ikari in Neon Genesis Evangelion, and movie fans as the regular voice of Daniel Radcliffe, especially in the Harry Potter films (starting from the third film onwards).

His younger sisters Xochitl and Gabriela are also voice actresses themselves, and they have worked together in many projects. In addition, his son (Emiliano Ugarte) and niece (Constanza García) are also into voice acting.

As the VA for Daniel Radcliffe:

As the VA for Shia LaBeouf: