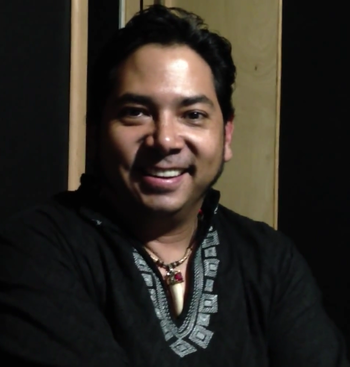 Víctor Hugo Aguilar Santana (Born on November 2, 1969) is a Mexican voice actor, best known as the Latin American voice of Johnny Bravo. He started his carreer as a VA in 1989.

Due to their similar voices, many have confused him with fellow Badass Baritone Blas García. This isn't too suprising, considering they have shared many characters and dubbed many of the same actors, such as Sylvester Stallone and Samuel L. Jackson.

As a curious fact, and rather suprisingly, he actually is related to Carlos Santana; the famous cuban musician is his uncle.

As the VA of Sylvester Stallone

As the VA of Samuel L. Jackson