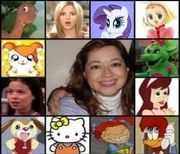 Elsa Covian and some of her roles
Advertisement:

Elsa Verena Covián Iturriaga (born May 27, 1964) is a Mexican actress, voice actress, singer and literary editor who has been active in voice acting ever since 1987. She tends to voice action girls and plucky girls, double if they look super cute but have rougher sides.

Her ex-husband (Eduardo Tejedo) is also a voice actor.

As the VA for Winona Ryder:

As the VA for Heather Matarazzo:

As the VA for Anna Faris