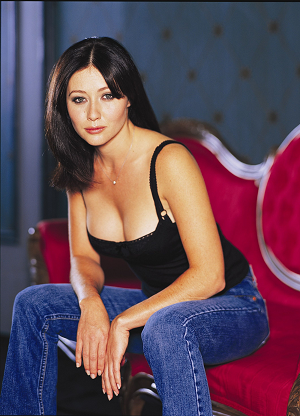 Shannen Maria Doherty (born April 12, 1971 in Memphis, Tennessee) is an American actress, producer, author, and television director. She is best-known for her roles on Beverly Hills, 90210 and Charmed.

She was born in Memphis, Tennessee, and raised Southern Baptist. She had guest spots in television series including Voyagers! and Father Murphy, the latter of which led to the recurring role of Jenny Wilder on Little House on the Prairie.

Her first major film role was in Heathers in 1989, followed by her Star-Making Role as Brenda Walsh in Beverly Hills, 90210, for which she was nominated for a Young Artist Award in 1991 and 1992. After leaving the show in 1994, her career consisted primarily of made-for-tv movies, aside from a lead role in Mallrats in 1995 and a cameo in Jay and Silent Bob Strike Back. In 1998, Doherty was cast in her second Aaron Spelling series, Charmed, where she played Prue until leaving at the end of the third series, which earned her two Saturn Award nominations for Best Genre TV Actress.

Since 2003, Doherty has enjoyed a diverse career in TV movies, Syfy series and films, and competitive reality shows, as well as starring in the animated web series Mari Kari.