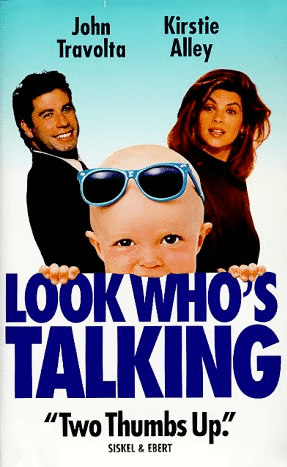 Mikey: So they come in different sizes? What are these? Jumbos?
James: Are you thinking what I'm thinking?
Mikey: Yeah-heh. Lunch!
Advertisement:

A 1989 comedy film directed by Amy Heckerling and starring John Travolta, Kirstie Alley, and the voice of Bruce Willis.

Mollie Jensen (Alley) is an accountant living in New York City. She's been having an affair for quite some time with a wealthy married client, Albert (George Segal), who continuously makes excuses for why he hasn't left his wife yet. Mollie ends up pregnant, and Albert promises to support both her and the baby.

But then, she finds Albert with another woman. The shock sends her into labor, and she is forced to take a cab driven by James Ubriacco (Travolta) to the hospital. James is a nice guy, sticking around and providing support all through the birth. A few days after, he shows up at her apartment to return her purse, which she had left in the cab. He immediately hits it off with Mollie's newborn son Mikey (Willis). Eventually, a relationship develops between the two adults, with baby Mikey commenting on it all the way.

Let's face it, the real appeal is not in the romantic comedy plotline, but the fact that this time, we get the baby's POV on the matter.

It was followed by two sequels. Look Who's Talking Too (1990) added Roseanne Barr as the voice of Mikey's newborn sister Julie and Damon Wayans as the voice of Mikey's best friend Eddie. In Look Who's Talking Now (1993), the children have grown to speaking age and so we see things instead from the new dogs of the Ubriacco family, Rocks (Danny DeVito) and Daphne (Diane Keaton). They didn't fare as well as the first one, with the first sequel even getting two Razzie nominations. Also spawned a short-lived Spiritual Successor sitcom, Baby Talk, which ran for two seasons from 1991-1992. While the sitcom was a different continuity and none of the film's characters appear, the characters were created by Amy Heckerling, who wrote and directed the first film.