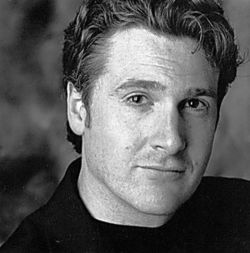 That's because David Kaye (born as David V. Hope on October 14, 1964 in Peterborough, Ontario, Canada) is the second most well-known voice of Megatron behind Frank Welker (although Kaye is considered the definitive Voice Actor for the Beast Era version of the character). He is also very well-regarded for his roles as either strong Pretty Boy characters, big badasses, or confident Big Bads. He seems to be voicing a lot of robots. Despite such recognition and how long he has performed his Megatron voice, he has an exceptional range that makes it difficult to point single out any particular role as being him. Is one of the most versatile voice actors out there, not only in terms of vocal range, but just in terms of the stuff he had done, especially while he was still living in Vancouver - he started out in radio, and then did a fair amount of voicing in Western Animation, Anime, Video Games, commercials, doing theater and on-camera guest appearances etc. for a good number of years, while also occasionally travelling to Los Angeles to do some animation and video game work, before finally moving to L.A. in 2007. Now he does work for a lot of TV promos and movie trailers (one of his mentors in that field was Don LaFontaine himself!), narrates segments for HBO's Last Week Tonight, and has several regular roles on American cartoons and some video game franchises.

A running joke among the fandom is that he was also the announcer for the "Male Enhancement" commercials... we're sure the Missus is very happy with him, yeeesss!

Notable Vancouver roles by David Kaye (most from The Ocean Group):

Megatron and the Golden Disk

Jobby had several voice lines from David Kaye specifically recorded for his review, but Kaye has his limits.

Example of:
Who Writes This Crap?!

Megatron and the Golden Disk

Jobby had several voice lines from David Kaye specifically recorded for his review, but Kaye has his limits.