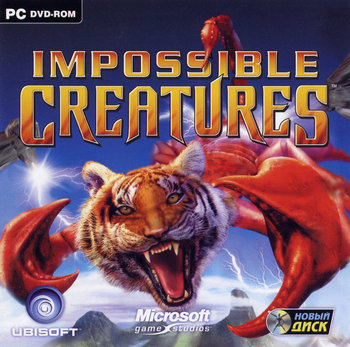 A Different Kind Of Animal.
Advertisement:

Impossible Creatures is an 2003 RTS by Relic Entertainment (of Homeworld fame), where you take 2 of 76 creatures, combine their features and then use up to 9 of them in your army. Although the game was rather well received by critics, Impossible Creatures sold poorly, thus denying any possiblity of a sequel. In spite of this, Relic itself would release a minor Expansion Pack in 2004, called Insect Invasion, which added 15 new creatures and a bunch of new multiplayer maps.

The campaign mode followed the story of Intrepid Reporter Rex Chance, who teams up with scientist Lucy Willing in a quest to find his father, Dr. Eric Chanikov. He finds out about his father's death, and thus resolves to stop megalomaniac executive Upton Julius, who plans on using Sigma technology (combining animals) to rule the world.

The game's engine would later be reworked and used in Dawn of War.

On November 2015, the game was re-released on Steam as Impossible Creatures: Steam Edition, by Nordic Games, and later released on GOG.COM.